My previous tutorial on Photoshop Type Masks mentioned that the same result can be achieved in other Adobe® programmes. Here is the InDesign method. Very different approach as you are working with vector shapes rather than the image pixels, but still fairly simple to do.

The main difference in the end result is that the type is no longer editable text, as it is in the Photoshop method, so you need to make sure your typeface choice, text to be used and your spelling, are right to start with. I’ll use the same image and text as before.

1 Place the image you want to use on your InDesign page, at the size you want it to be (you can make the finished result bigger or smaller later, if you need to). 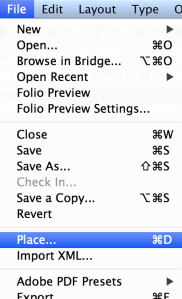 2 Create a text box on the same page, below the image, making it as wide and deep as the image itself – you are going to fill it with chunky text.

3 Format the text to fill the text box. In my example I again used Impact as the typeface, with a point size of 114pt and closed the leading to 110pt, making it a solid shape. The colour of the type doesn’t matter as this will be hidden in the end result.

4 Unlike the Photoshop method, InDesign doesn’t use a layer mask. Instead we are going to fill the text with the image. This is the point where you lose the option to change typeface or spelling.

5 Your text is now a graphic object.

Notice how the bounding box has changed around the type – it is no longer a text box and now hugs the edges of the type. The dotted line of the bounding box tells you that the contents are grouped objects. 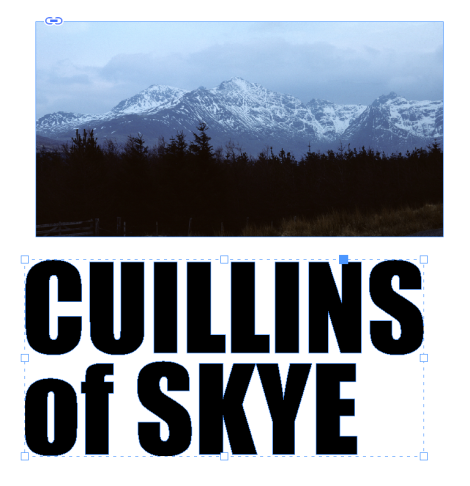 6 Before we apply the image, there’s another step to complete. We need to tell InDesign to see the letter shapes as one object, rather than the separate shapes they are at the moment.

Click twice on the top word and you should be able to pick this up in its own image box, as shown below. Now hold down the Shift key and click once on the next line of type.

You should see the type as shown below – all the letters will have a path around them showing the individual anchor points.

7 Keeping the type selected in this way, go to Object – Paths – Make Compound Path. This fools InDesign into seeing the letter shapes as a single path (simply grouping the letters doesn’t do this).

8 Select the original image and copy it. Select the type again and go to Edit – Paste Into (shortcut Alt+Command+V). The image should now fill the letter shapes.

9 Although the text is no longer editable, in terms of spelling or typeface, you can still change things. If you get your Direct Select tool (the white arrow) and click on the image, you can move it independently of the letter shapes just like you can with any ‘normal’ placed image within its frame.

As you can see below I have moved the image up, revealing the original black colour of the text underneath. This black is now, in effect, a colour fill applied to the image box. You can change this in the Swatches panel or apply ‘None’ for no fill, if required.

10 If you click and hold on the image, or one of the corners, you should see the whole image with a ghostly appearance to the bits that are outside the letter shapes. This will help you resize or move the image to improve the composition within the letter shapes. I’ve made the image a bit bigger and moved it up so that more of the mountain edges are visible.

It’s worth saying at this point that you can also edit the vector shapes of individual letters using the Direct Select tool . . . but that’s for another exercise. Let’s leave the shapes as they are for the moment.

That’s it, the final type mask is shown above. Keep in mind that this is now an image box and can be resized, moved, placed on top of another image, rotated etc., just like any other image in your InDesign artwork.

You can also edit the original linked image in Photoshop. I applied a Hue/Saturation tint, saved the image and updated the link in InDesign, with the result shown below.

Graphic designer for print and design educator. View all posts by David